Ron Sturgis is now "homeless, but not Jason McDonald! 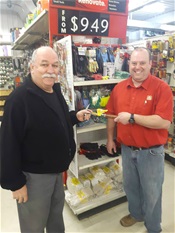 After 51 years in the hardware business, Rob Sturgis has decided to hand over "the hammer" along with his business to new owner and friend Jason McDonald. In explaining his decision to sell his Dresden Home Hardware, Sturgis simply said ìt`s time.  I`ve been in and around the hardware business since I was a teenager working first for Gordon Clark at Clark's Fuel and Supply, then later as a sales rep for a national distributor of hardware supplies.

When the opportunity presented itself to buy Dresden Hardware from John McKay, I jumped at it, said Sturgis ànd we`ve never looked back. We relocated the downtown Dresden store to a new building across from the LCB0 in 2003 with warehousing following a few years later. "I've truly enjoyed the hardware business, especially my customers, friends and staff, but it`s time to move-on to whatever is next, "Sturgis said.

As for Jason McDonald, he couldn`t be more thrilled in having assumed ownership of Dresden Hardware an institution dating back over 80 years since its founding by Ed and John McKay. Jason started in the hardware business as a teenager stocking shelves and doing whatever else he was told when John McKay owned the store.

Later when Ron bought the McKay business, he built a new store and it became part of the Home Hardware dealer-owned system with sales and growth coming immediately. Later Jason was named store manager and as of today store owner.   I would like to thank Ron for making this opportunity available to me, he`s been a great boss and friend over the past 25 years and I intend to carry on the traditions of excellence in customer service with the help of my experienced and enthusiastic staff.

(Across from the LCBO).